Skip Navigation
You are here: Home » May 2021 update on Synthetic Cannabinoids

May 2021 update on Synthetic Cannabinoids

What are synthetic cannabinoids?

Many synthetic cannabinoids were first developed to study the endocannabinoid system and to review their potential to treat a number of diseases. Since around 2006, ‘legal high’ products containing synthetic cannabinoids have been sold in Europe as ‘herbal smoking mixtures’ and marketed as ‘legal’ replacements for cannabis. These substances would have formally been sold in Head Shops in Ireland labelled as 'Spice', 'Black Mamba' and other commercial brand names. These substances continued to emerge on the drug market despite the closure of Head Shops. More recently, these substances have been appearing in cannabis products throughout Europe without consumers knowldge.

What are the latest developments?

There has been increased concern regarding the emergence of synthetic cannabinoids and their potential threat to health following identification of these substances in hash, weed, vape and in low THC products throughout Europe.

The European Monitoring Centre for Drugs and Drug Addiction (EMCDDA) highlighted that the adulteration of products with synthetic cannabinoids has been confirmed in France, Germany, the Netherlands, Slovenia and Sweden. Between September and December 2020, Sweden reported 36 seizures of low-tetrahydrocannabinol (THC) cannabis products which contained synthetic cannabinoids (EMCDDA, 2021). Recent samples analysed by the Welsh Emerging Drugs and Identification of Novel Substances Service (WEIDNOS) indicates that the majority of cannabis and THC vape products have been found to contain synthetic cannabinoids. 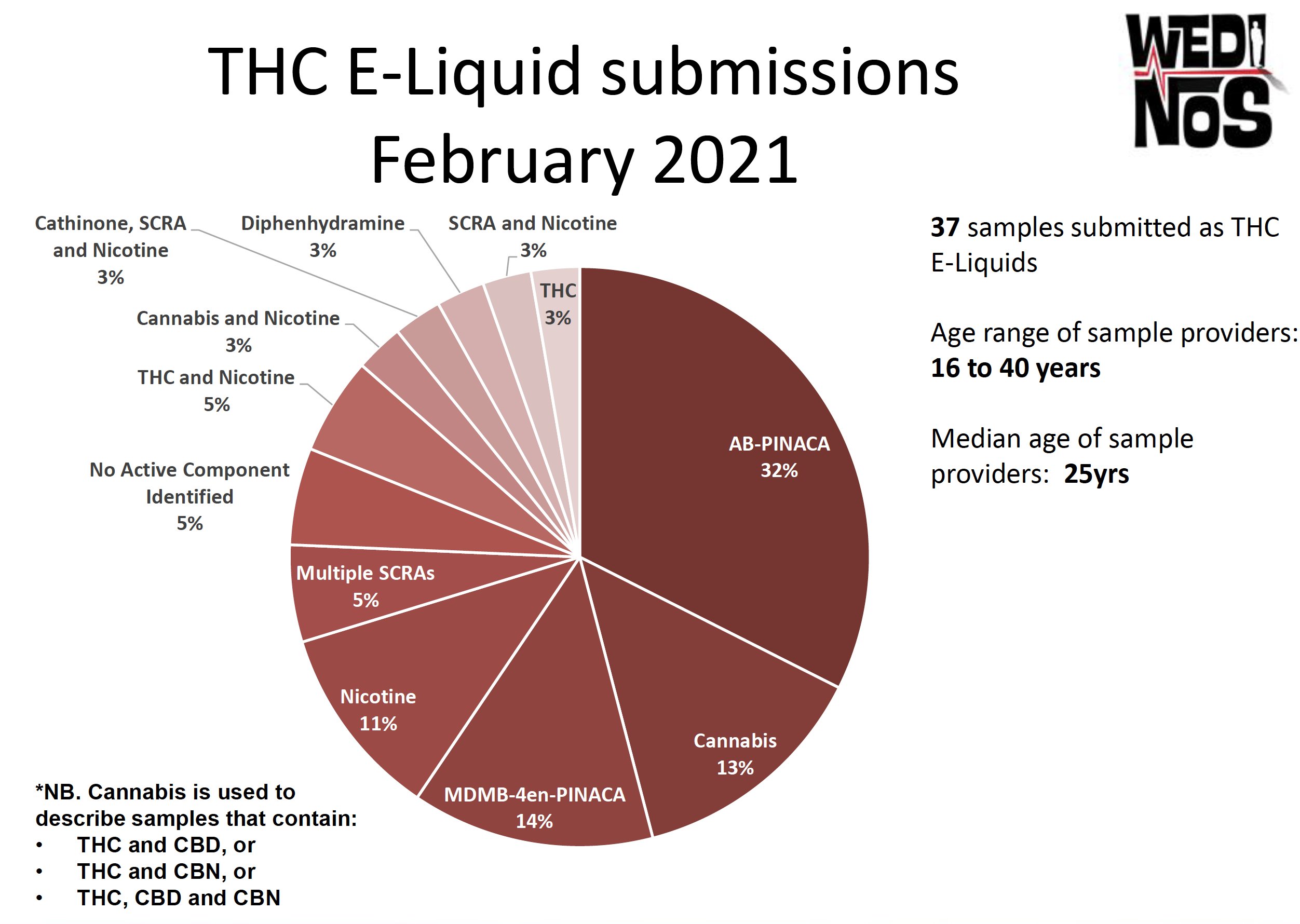 A number of warnings have been issued to raise awareness among the general public in countries where these substances have been found. In December 2020, the Dutch Drug Information and Monitoring Service (DIMs) noted that they had analysed several hash and weed samples since October 2020 that were found to be contaminated with synthetic cannabinoid MDMB-4en-PINACA. It was further stated that the samples did not differ in appearance to uncontaminated hash or weed products highlighting that there is no way a person could recognise the difference.

A warning was also issued by the Public Health Agency in Northern Ireland in 2020 and again in April 2021 following the hospitalisation of young people after using cannabis vape products which were described as containing 'Spice'.

A total of 11 acute non-fatal poisonings with confirmed exposure to the synthetic cannabinoid MDMB-4en-PINACA by the United Kingdom occured between January and August 2020. A total of 12 deaths with a confirmed link to the same substance MDMB-4en-PINACA were reported by Hungary (8), the United Kingdom (3) and Sweden (1) between January 2019 and Auguest 2020.  In all of these cases, other substances were also identified indicating a poly pattern among the cohorts expossed this cannabinoid with benzodiazepines, opioids, pregabalin, THC, alcohol and synthetic cathinones also present at the time of death (EMCDDA, 2021).

What are the effects of synthetic cannabinoids?

The effects of synthetic cannabinoids will be much stronger than that of cannabis and will greatly increase the risks for those who consume.

These products do not contain cannabis but are intended to produce similar, more potent effects. However, they should not be confused with cannabis.

Limited information is available about how these substances work and their toxic effects in humans. However, their use has caused many serious poisonings and deaths internationally in recent years. There have also been outbreaks of mass poisonings due to their use.