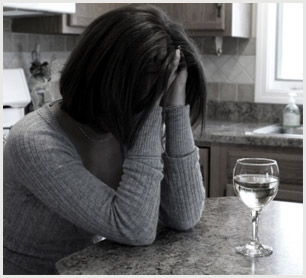 Addiction is also called “Harmful Dependence”. We depend on water and air, but these are not called addictions, because they are not harmful. Addiction is when a person is dependent on a substance which is causing harm.

(a)  Drinker A goes on a binge every two or three months, which lasts a couple of days, and which leaves the drinker sick, exhausted and depressed.

(b)  Drinker B is rarely seen drunk but drinks several units of alcohol every day and has been warned by his or her doctor that they are damaging their liver. But despite the warning they keep on drinking.

(c)  Drinker C can go into a pub and leave after one or two drinks, but on some occasions they won’t leave the pub till they are put out at closing time, and by then they will be very drunk. Their problem is that on going into the pub they cannot predict when they will leave.

The identifying characteristics of alcohol dependence are:  the inability to resist alcohol (what AA calls powerlessness) and the harm that is caused by the drinking (the unmanageability).