Skip Navigation
You are here: Home » Alcohol Info » Worried about someone? » How drink can affect families

How drink can affect families 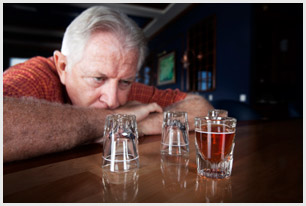 This page looks at the effects on the rest of the family when someone in the family is misusing alcohol or other drugs. In some cases the drinker is not dependent or alcoholic. He or she is just drinking in a way that upsets the others.

We look at the effects on a family under these headings:


When a parent is misusing alcohol or drugs

It is well known that a parent with an alcohol or drug problem can have a marked effect on the other family members. The person with the problem is like someone stuck in a bog. The others, in their efforts to help, often get pulled down into the bog too. The first step in putting things right is when the others start to get their own feet on solid ground. Only after they have done this, will they be able to help to tackle the addiction problem.


How a parent’s alcohol misuse affects the spouse or partner

It is not easy to live with a person whose drinking or drug use is causing problems. The drinker or drug user is often full of conflict, torn between wanting their drug or alcohol and not wanting the harm that always seems to follow. They often blame others when things go wrong.

The partner or spouse often doubts herself (or himself). Am I not a good enough partner? How can I get her or him to stop taking that drug? How can I protect my children? How can I hide this from my family and neighbours?

The partner often feels hurt, ashamed, fearful, with an overwhelming sense of failure.  Unfortunately, many partners then work all the more strenuously, taking on extra responsibilities, trying to cover up the mess …fighting a losing battle.

If you are that partner, the first step towards putting things right is to take some time for yourself, and get support for yourself. A good friend or a counsellor can be a great help. See “family support” below.

How the alcohol-misusing parent affects the sons and daughters

The son or daughter of a parent who misuses alcohol,  can also end up bogged down. They often adopt a role which helps the family, but they get stuck in the role and neglect their own needs. Sharon Wegscheider describes the following roles. Can you see yourself in one of these roles, or in a combination of a couple of them? You can change! It’s easier if you get support.

This is often the eldest in the family. This person is responsible, works hard for approval, and often appears successful. But inside, this person often feels insecure, as if things are always going to go wrong, and feels incompetent, confused and angry.

This person feels blamed when things go wrong. Everyone focuses on this person’s faults, which provides the family with a distraction from the real problem. So this person often seems rebellious, troublesome, law-breaking, tough …and may be at risk of misusing drugs. Inside, this person is often full of fear, hurt, rejection and loneliness, feeling angry at the unfairness of how they are treated.

This son or daughter appears as a dreamer, drifting above the troubled waters that bother other people. But inside, the person is not as contented as they appear. They are quietly hurt, angry, lonely with a feeling of being inadequate.

Sometimes also referred to as the clown, the person in this role is often charming and cute, fun to be with, quick to make a joke. Sometimes they are quite hyper-active and flit from one interest to another; sometimes quite fragile and easily hurt. But they are good at hiding the hurt, and other feelings of loneliness, insecurity, fear and low self esteem.

If you recognize any of these roles as being ‘you’, the first step to putting things right is the same as for the Partner – to take time for yourself, to talk to a friend or a counsellor. Stop thinking about the addicted person for a while (easier said than done!) and pay attention to your own real needs. See the “family support” section below.

There are more children who are badly affected by their parents’ drinking than there are parents who are upset by the children’s drinking. The sons and daughters of problem-drinking parents need support, and Crosscare Drug & Alcohol Programme offers support or referral.


A son or a daughter with an addiction problem

Whole families can seem to go to pieces when there is a son or daughter using drugs. Parents fall out with each other over how to handle the situation. Other sons or daughters get blamed for being a bad example. The drug user gets so much attention that others are neglected. Rows and bad language upset the peace. If peace and love are the oxygen of life, the whole family is gasping for breath.