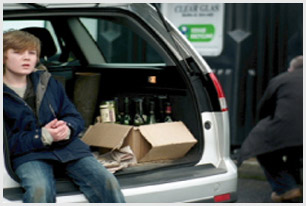 Concerned about a young person's drinking?

If you are a parent, family member or guardian who is concerned about a young person’s pattern of alcohol use, this section is for you. Young people’s drinking is a cause of concern to many parents. The teenage years of adolescence are when a lot of development, both physical and psychological, takes place. Some of these changes are visible, such as their growth, their height. Others are invisible, such as developments in their brain, their emotions and their psychology. The presence of alcohol during these years may impair development, especially if it is taken in excess.

Even moderate drinking in adolescence has its risks. A young person, unused to the effects of alcohol, may get sick, take unnecessary risks, have an accident, miss out on work, school or sport, or become a burden to their friends.

Heavier drinking in adolescence increases the risk of later problems of dependence on alcohol or other substances. Postponing the first alcoholic drink reduces the likelihood of later problems.

Alcohol adds greatly to the challenge of being the parent of a teenager. The difficulty for the parent is to know how much freedom to allow and how much control to retain.

What do I do if I know or suspect my teenager is drinking?

Tell them to try and not to:

Things your teenager should know:

Parents generally wish to help their daughters and sons to avoid any of the problems which might arise from alcohol use or misuse. While the most effective way of avoiding alcohol problems is to avoid drinking alcohol, the majority of Irish young adults have taken an alcoholic drink before they are 21 years of age.

Where to get help

There are a number of information, support and counselling services providing support around alcohol and alcohol related problems. Contact details for many of these services can be found on the Services Directory of the drugs.ie website or by calling the Drugs Helpline freephone 1800 459 459. For a comprehensive listing of counsellors and psychotherapists in Ireland see www.counsellingdirectory.ie

You can also go to your GP who will be able to refer you to get the support that you need.