Skip Navigation
You are here: Home » News » Lord Mayor to launch ‘What’s in the pill?’ campaign aimed at student population

Lord Mayor to launch ‘What’s in the pill?’ campaign aimed at student population 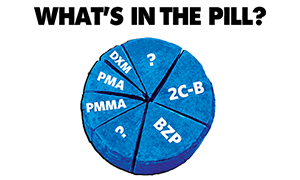 Later today the Lord Mayor of Dublin will launch the ‘What’s in the pill?’ campaign aimed at student population

The Lord Mayor, Councillor Criona Ni Dhalaigh in launching the campaign which urges students to think about drug use, and in particular about party drugs like ecstasy. The ‘What’s in the Pill?’ campaign is the result of a collaboration between three Dublin Universities – DIT, TCD, and UCD and the Ana Liffey Drug Project. Resources created include posters and a factsheet, which will be distributed on campus as well as promoted on social media and via the drugs.ie website. Speaking about the campaign the Lord Mayor said:

“I welcome this initiative, which I understand is the first time that universities and a drug service have worked together to develop drug-related resources for student populations. These resources give an important message, with a pragmatic focus – that it is always safest not to use drugs at all, but if you do choose to do so, that it is vital to have access to unbiased, evidence based information.”

Lysette Golden is Welfare Officer for DIT, one of the third level institutions involved. She said:
“The only way to make a difference is to not be afraid to talk about the sensitive subjects. Drugs are common and popular, we all know this, yet fail to talk about them openly. Through this campaign we are breaking the silence and starting this conversation."

These sentiments were echoed by Clare O’Connor from UCD, who noted:
"With this campaign, we're acknowledging that recreational drug use does happen around Ireland and we're trying to put in place a harm reduction strategy in that context. We need to engage people taking drugs with information like this which could help prevent loss of life.”

Conor Clancy the Welfare Officer for Trinity College Dublin Students' Union highlighted,
“The Campaign aims to get harm reduction information out to students which has the potential to save lives and prevent harm, while also encouraging students to question drug usage and consider the harmful content in illegal drugs.”

The campaign focuses on harm reduction information related to pill taking. In 2014, there were a number of deaths across Europe related to PMA (Paramethoxyamphetamine) and PMMA (Paramethoxymethamphetamine) which were reported in the national press . There were also two inquests heard at Dublin Coroner’s Court into the deaths of men who died in separate incidents having taken PMA over the June bank holiday weekend in 2013.

“It’s not possible to tell what’s in a pill by sight, smell or taste. While PMA and PMMA are widely known substances which are commonly found in what is sold as ecstasy, there are many others which are not so well known. It was great to work with the universities on what is a pragmatic and helpful resource. Hopefully, it will help many students to make safer decisions.”

Minister of State with Responsibility for the National Drugs Strategy, Aodhán O ‘Ríordáin TD was also be present at the launch, he noted that the campaign was a positive example of different stakeholders working together for a common goal:

“It’s great to see positive work like this, informed by evidence. Both the universities and the Ana Liffey are to be commended for this campaign. I understand that there is an intention for them to work together again in the near future, which is exciting and welcome. Drug use is a health issue, which affects all strata of society and it is important to make sure that people have the information they need to make healthy choices.”