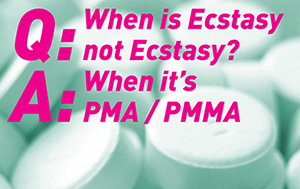 PMA and PMMA are stimulants with hallucinogenic effects similar to MDMA. However, they are toxic at lower doses than MDMA and can also take longer to take effect.

After the intake of a small amount of PMA/PMMA, blood pressure and body temperature rise steeply. The effects can feel similar to MDMA, although less euphoric. Larger doses can lead to coma and death.

Why should I know about PMA/PMMA?

It’s always safest not to take drugs, but if you are going to take, or are planning to take ecstasy, you should know about PMA/PMMA.

A number of pills recently sold as ecstasy were tested and found to contain PMA/PMMA. PMA/PMMA is similar to MDMA (the active substance in ecstasy) but can kill at lower doses as it is more poisonous.

These drugs have been implicated in a number of hospitalisations and deaths. A number of people have died and their symptoms included one or more of the following: extremely high body temperature; very rapid heart rate; difficulties breathing or stopping breathing; and convulsions (fitting). Each of them thought that they were taking ecstasy and consumed several PMA/PMMA pills, assuming it to be poor quality MDMA.

PMA/PMMA is currently in circulation in Ireland. Between December 2013 and May 2014, at least 6 people in Ireland have had PMA/PMMA in their system when they died. Particularly implicated are ‘Green Rolexes’ and ‘Green Apples’. However, all pills should be treated with suspicion, as there is no visual way to tell the contents of your pills.

It’s always safest not to take unknown drugs at all, but if you are going to use, be in the know:

• Feel a little drunk, similar to the effects of alcohol
• Have mild hallucinogen-like perceptions
• Have pins and needles, a numb or furry sensation of the skin or numbness in limbs

If you think you or a friend have taken PMA/PMMA:

To find a drug service near you visit drugs.ie/services