Skip Navigation
You are here: Home » Features » What is a drugs task force?

What is a drugs task force? 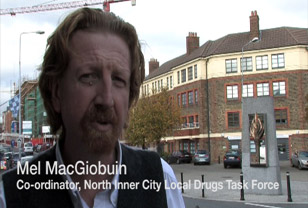 
Together making a difference

The event, entitled ‘Together making a Difference’, was a showcase of the work of projects funded through the NICDTF.

On the day, over 20 projects exhibited information about their work and achievements. In addition, small project groups and school classes were facilitated to view exhibits throughout the day.

This event proved an ideal opportunity for drugs.ie to present an overview of the diverse range of projects that a Local Drugs Task Force is involved in supporting / funding. To highlight this, we attended the event and spoke to some of those involved with the projects and services funded by the NICDTF. In this video, representatives from many of these projects and services provide a brief overview of the nature and scope of their individual services. To provide a backdrop in relation to the broad activities of the task forces, we first spoke with Mel MacGiobúin, NICDTF co-ordinator. During this interview Mel presents an insightful overview of the general activities and objectives of the task force.

There are 10 regional and 14 local drugs task forces covering the Republic of Ireland.

The task forces were developed to combat the threat from problem drug use throughout the country through the use of an area-based partnership approach between the statutory, voluntary & community sectors including public representatives. The structure is intended to facilitate the development of effective, targeted, local responses through the utilisation of the knowledge and experience of all sectors in designing and delivering those services and through facilitating the improved co-ordination of service provision.

The overall aim of the Government’s drugs policy is to provide an effective, integrated response to the problems posed by drug and alcohol misuse. The strategic aims of the National Substance Misuse Strategy are:

The original terms of reference of the drugs task forces required them to assess the extent and nature of the drug problem in their areas and to develop and monitor the implementation of action plans to respond to the problem as identified. The following are their revised terms of reference:

DTFs are to work closely together to develop Cross Task Force initiatives, promote networking arrangements, exchange information and experience and facilitate the dissemination of good practice with each other and other relevant bodies.

Pending the review of Drug Task Force boundaries, Task Forces will continue to work within the following broad areas of responsibility:

Stay with this guys, you’re hpeinlg a lot of people.