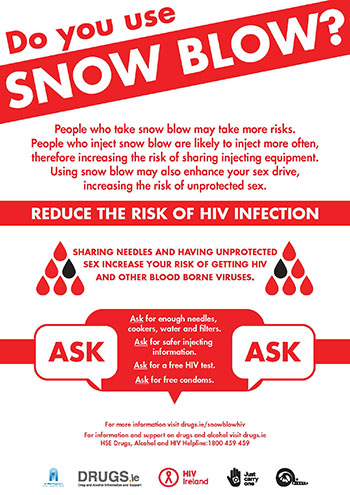 HIV diagnoses are increasing among people who inject the drug snow blow.

People might not always disclose that they are using snow blow.

For those working with people who currently use snow blow, remember to:

What is Snow blow?

Snow blow is a type of drug called a cathinone. It is similar to cocaine in that it is a short-acting stimulant drug.

A number of different cathinones have been sold in Ireland as snow blow.

In powder form, cathinones are generally a fine white, off-white, yellowish or brown powder. They can also come in crystal form.

Cathinones can be snorted, injected, inhaled or taken orally.

Cathinone substances became well known in 2007 when they were available legally in head shops in Ireland and they continue to be used among certain drug-using groups in Ireland.

The Criminal Justice (Psychoactive Substances) Act 2010 effectively closed down the head shops by making it an offence to sell or supply for human consumption, substances which have psychoactive effects that are outside the remit of the Misuse of Drugs Act 1977.

However, many of these substances are now available through other channels and are still being used.

Between 2005 and 2014 more than 81 synthetic cathinone derivatives were reported to the European Union (EU) Early Warning System.

A number of cathinone derivatives have been sold in Ireland as snow blow, including:

What are the effects of snow blow?

Because snow blow is the name given to a number of different cathinone derivatives in Ireland, people may experience different effects depending on what cathinone they have taken.

Short-term effects of cathinones may include:

Snow blow use is associated with difficult comedowns and has also been associated with a recent increase in individuals presenting to emergency departments with acute psychotic episodes.

Of particular note is the suicide association with cathinones.

A UK study found a proportionally high-prevalence of cathinone drugs in hangings or other mechanical suicides (not suicide by drug overdose) compared to other new psychoactive substances.

Snow blow is a short-acting stimulant type drug similar to cocaine or amphetamines - meaning people tend to re-dose frequently - with some reporting injecting between 10-20 times a day.

This can result in users running out of clean injecting equipment and reusing or sharing equipment.

Snow blow users should be encouraged to ask for enough needles, cookers, filters, water, injecting information and condoms at their needle exchange.

It is possible to overdose on stimulant drugs.

Signs of an overdose are:

If you encounter someone who has overdosed on snow blow, place them in the recovery position and call 112.

In February 2015, an outbreak of recently acquired HIV infections among people who inject drugs (PWID) was identified in Dublin.

A multidisciplinary incident team was set up by the Director of Public Health in Dublin to investigate and respond to the increase.

Clinicians were concerned that the increase was linked to injection of the synthetic cathinone a-PVP, street name snow blow, with more frequent injecting and unsafe sexual and needle-sharing practices.

The increases were mainly seen in chaotic polydrug users, many of whom were homeless.

An epidemiological investigation and case-control study were undertaken by the HSE which reported the following summary results:

The investigation is the first evidence of an association between injecting snow blow and recent HIV infection in Ireland, with daily snow blow injectors being at highest risk.

Snow blow has been found to contain a-PVP, a second generation cathinone and is closely related to MDPV.

Report on the epidemiological investigation and case-control study

In Dublin, there are more than 500 homeless PWID, a significant population at risk of HIV infection.  For those working with PWID who may be at risk, there are a number of measures that can be taken:

Snow blow users tend to inject more often, therefore they require more injecting equipment. It is helpful to ask how many times a day they expect to inject - and to then calculate how much equipment they will need.

Condoms, when used consistently and correctly, are the best way to prevent the sexual transmission of HIV and other sexually transmitted infections (STIs).

Using snow blow can increase a person’s sex drive, therefore increasing the risk of unprotected sex.  Encourage service users to be prepared and carry condoms with them.

Safer Sex Advice for people who use snow blow:

Information on condoms and how to use condoms correctly

People can have HIV and not have any symptoms.

The only way to know if a person has contracted HIV is to get tested.

By getting tested and knowing your HIV status you can:

HIV testing is confidential. Pre and post-test counselling may be available at some testing clinics.

HIV testing is available free in Ireland at public testing clinics. The HIV test is a blood test.

Anyone who discloses a potential recent exposure to HIV, through unprotected sex or from a needle, should be referred to a hospital emergency department or HIV/STI clinic to get assessed for PEP.  Ensure that the potential exposure was within the 72 hour time period before referring as PEP will not be prescribed once this time has elapsed.

HIV Ireland
www.hivireland.ie
Free HIV and STI testing on the second and fourth Wednesdays of every month. Free condoms – walk-in service. Free community support services for people living with HIV. List of other free HIV testing clinics and services. List of other organisations where free condoms are available. List of clinics and hospitals that provide PEP. A range of downloadable resources on HIV and sexual health.