Children affected by a parent’s drinking 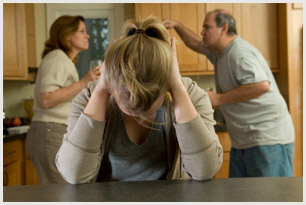 When drinking is a problem

Anthony is already in bed when he hears the front door slam. He covers his head with his pillow to drown out the predictable sounds of his parents arguing. Anthony is all too aware that his father has been drinking again and his mother is angry.

Many teens like Anthony live with a parent who is dependent on alcohol, a person who is physically and emotionally addicted to alcohol. Alcohol dependency has been around for centuries, yet no one has discovered an easy way to prevent or stop it. It continues to cause anguish not only for the person who drinks, but for everyone who is involved with that person.

Why Does My Parent Drink?

Alcohol dependency can be called a disease because the person is at a dis-ease with themselves. Like any disease, it needs to be treated. Without professional help, an alcohol dependent person will probably continue to drink and may even become worse over time.

Other people may tell themselves that their parents drink because of some other problem, such as having a rough time at work or being out of work altogether. Parents may be having marital problems, financial problems, or someone may be sick. But even if an alcohol dependent parent has other problems, nothing you can do will make things better. The person with the drinking problem has to take charge of it. No one else can help the dependent person get well.


Why Won't My Parent Stop Drinking?

Denial can play a big role in an alcohol dependent person’s life. A person in denial is one who refuses to believe the truth about a situation. A problem drinker may blame another person for the drinking because it is easier than taking responsibility for it. Some alcohol dependent parents make their kids feel bad by saying things like, "You're driving me crazy!" or "I can't take this anymore."

An alcohol dependent parent may become enraged at the slightest suggestion that drinking is a problem. Those who acknowledge their drinking may show their denial by saying, "I can stop anytime I want to," "Everyone drinks to unwind sometimes," or "My drinking is not a problem."

If you're like most teens, your life is probably filled with emotional ups and downs, regardless of what's happening at home. Add a parent with a drinking problem to this tumultuous time and a person's bound to feel overwhelmed. Teens with alcohol dependent parents might feel anger, sadness, embarrassment, loneliness, helplessness, and a lack of self-esteem.

These emotions can be triggered by the added burdens of living with an alcohol dependent parent. For example, many alcohol dependents behave unpredictably, and kids who grow up around them may spend a lot of energy trying to feel out a parent's mood or guess what he or she wants. One day you might walk on eggshells to avoid an outburst because the dishes aren't done or the lawn isn't mowed; the next day, you may find yourself comforting a parent who promises that things will be better.

There may be problems paying the bills, having your Mam or Dad show up for important events, and you may even have to take care of younger siblings, too. The pressure to manage these situations in addition to your own life can leave you exhausted and drained.

Although each family is different, teens with alcohol dependent parents almost always report feeling alone, unloved, depressed, or burdened by the secret life they lead at home. Because it's not possible to control the behavior of an alcohol dependent person, what can a person do to feel better?

Teenage children of alcohol dependents are at a higher risk of becoming alcoholics themselves. Acknowledging the problem and reaching out for support can help ensure that your future does not repeat your parent's past.

A parent who is a problem drinker is never your fault. Many kids of alcohol dependent parents try to hide the problem or find themselves telling lies to cover up for a parent's drinking. Admitting that your parent has a problem — even if he or she won't — is the first step in taking control.

Being aware of how your parent's drinking affects you can help put things in perspective. For example, some teens who live with alcohol dependent adults become afraid to speak out or show any normal anger or emotion because they worry it may trigger a parent's drinking binge.

Clearly, hiding your feelings can create its own set of problems. Acknowledging feelings of anger or resentment — even if it's just to yourself or a close friend — can help protect against this. Recognizing the emotions that go with the problem also can help you from burying your feelings and pretending that everything's OK.

Likewise, realizing that you are not the cause of a parent's drinking problem can help you feel better about yourself.

It's good to share your feelings with a friend, but it's equally important to talk to an adult you trust. A school counsellor, favorite teacher, or coach may be able to help. Some teens turn to their school, a sympathetic uncle or aunt.

You're not betraying your parent by seeking help. Keeping "the secret" is part of the disease of alcohol dependency — and it allows the problems to get worse. As with any disease, it's still possible to love a parent with alcohol dependency while recognizing the problems that he or she has. And it's not disloyal to seek help in dealing with the problems your parent's drinking create for you. In fact, taking care of yourself is what your Dad or Mam would want you to do if he or she could think about it clearly!

If you find yourself avoiding your house as much as possible, or if you're thinking about running away, consider whether you feel in danger at home. If you feel that the situation at home is becoming dangerous, you can call Childline and never hesitate to dial 999 if you think you or another family member is in immediate danger.

Because alcohol dependency is a disease and not a behavior, chances are that you won't be able to change your parent's actions. But you can show your love and support — and, above all, take care of yourself.